Not so with Kubo and the Two Strings. 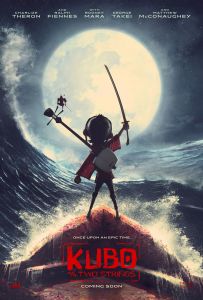 I loved this movie. And I want you to go see it.

Phenomenal Art
This movie deserves to have its praises sung from the mountaintops. It’s a beautiful stop-motion film from Laika, the company that did Coraline. The art style and execution in the film is nearly flawless. Everything looks amazing. And this was slightly surprising based on the billboard pictures I saw.

The characters have great expressions, and in some cases, what you see makes up for the voice acting (if only because it’s hard to take Matthew McConaughey’s voice seriously at first).

Check out some behind the scenes footage.

Kubo’s journey to set things right is simple, profound, and amazing. While it’s a hero’s journey like many movies out there, it was told in such a way that made me stop trying to predict what would happen next. I simply lost myself in each scene.

It was gripping, heartwarming, and piercing.

I would put it up there with certain Disney films (Aladdin, The Lion King), Ghibli films (Spirited Away, Kiki’s Delivery Service), Pixar films (Wall-E, Toy Story), Kung Fu Panda, and How to Train Your Dragon, as a prime example of the correct way to use animation to tell a story. This movie deserves to be in the company of the great films.

Check out the trailer for the film here.

Poor Advertising
Unfortunately, this movie hasn’t performed well at the box office. I blame poor advertising. The first and pretty much only ad I saw for it was a billboard near a bus stop. Maybe one commercial during the Olympics.

And it’s unfortunate that a movie this good is going unnoticed.

I am really hoping that it will garner the attention of the Academy when it comes time for the Oscars next year, because in my mind this movie is clearly the front runner for the Best Animated Feature category, as well as numerous special effects awards. And I hope that when the DVD/streaming options come out, that this movie attracts a larger audience.