Next Friday marks the anniversary of Abraham Lincoln’s assassination. He was shot on Friday, April 14, 1865. It was Good Friday, the same day on which Jesus was crucified.

Next Friday also happens to be Good Friday. This is the seventh time that’s happened in the 152 years since his death.

Earlier this week, I finished the book Team of Rivals: The Political Genius of Abraham Lincoln by Doris Kearns Goodwin. It was an interesting history and biography that followed the lives of Lincoln and some of the members of his cabinet, several of whom were his rivals for the presidential nomination in 1860.

While the other men and women in the book were interesting, all pale in comparison to Lincoln. Not that this book was a hagiography of Lincoln. Far from it. He is presented holistically, warts and all. But there are so many things about Lincoln the man–what he managed to accomplish and what he managed to represent–that are at once compelling and awe-inspiring.

Perhaps the two things that struck me as the most remarkable were that in all things, big or small, he was always willing to forgive someone, once a confrontation was over, and that his legacy was deeply important to him from his earliest years.

It’s easy to poke holes in admiration of Lincoln. By today’s standards, much of what he did would be easily construed as, if not actually, downright racist.

Was he an abolitionist who believed in equality of the races for most of his (political) life? Though it seems easy to assume this, it’s not very likely. He had a much more moderate approach, especially early on. Had he been such a radical (for the times), he likely would never have been elected as president.

Yet did he change his mind and come to new realizations throughout his life? Yes. He was willing to challenge his old beliefs and come to something new.

Did he do what he could to end slavery once it became a real possibility during the war? Yes. He enacted the Emancipation Proclamation as a possibly illegal war measure, because he believed that it would both end the war sooner, and that it was a morally right thing to do.

Then he exerted much effort to get the 13th amendment passed in early 1865. (The first time slavery is mentioned in the constitution is to abolish it. Imagine if someone had no understanding of the cultural heritage of America and read the constitution and came across the thirteenth amendment. Might it not have appeared that for slavery to be illegal went without saying?)

It’s not how Lincoln started, but how Lincoln finished that crafted his legacy, that makes people remember him the way we do now. There’s no point to put him on some moral table when it comes to all issues. He was a human, with weaknesses and strengths. And even if he came to the table late on actively abolishing slavery, rather than simply trying to contain it to where it existed and let it die out there, it doesn’t change what he did once he had the power to do so.

In Lincoln’s own life, he moved and acted in such a way that embodied his belief that all people could be redeemed. I find it easy to extend to him that same measure of grace.

As someone who isn’t generally an early-adopter, I recognize and appreciate his ability to adapt with the times and sentiments at a his own pace. Perhaps he was too slow for some, and too fast for others. Yet he was still willing to move forward. Always progressing, always learning. 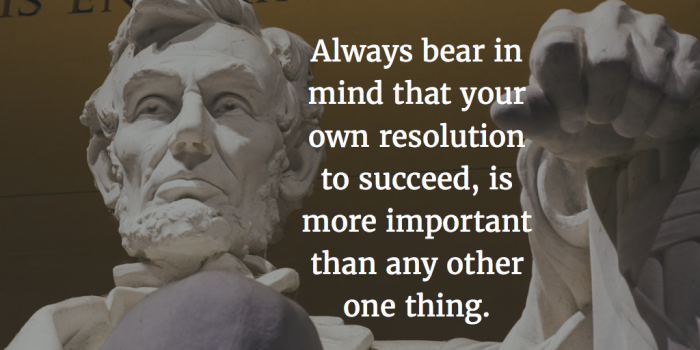 Lincoln’s ambition was his desire to be esteemed by others. In his first political address while running for the Illinois state legislature at the age of twenty-three, he said: “Every man is said to have his peculiar ambition. Whether it be true or not, I can say for one that I have no other so great as that of being truly esteemed of my fellow men, by rendering myself worthy of their esteem.” While it might sound needy by today’s standards, Lincoln wanted to build a legacy. At the front of his mind was to be someone who would make an impression, someone who would do something great. As the son of a poor dirt farmer from Kentucky, it was his driving goal to make something of himself.

That legacy was first and foremost in his mind can be seen even in some of his darkest hours. In 1840-41 when his friends worried–not without reason–that he was on the edge of suicide, he still wrote his friend: “But I have an irrepressible desire to live till I can be assured that the world is a little better for my having lived in it.” Not only Lincoln’s need to build a legacy, but his active construction of that legacy set him apart.

If you ask most people in America to name prominent historical figures, prominent political figures or past presidents, it might be difficult to come up with a list that doesn’t include Lincoln. He wanted to build a legacy. And he did it.

Had Lincoln not been there to lead the nation in 1860, would the country have split into two for good? Would there have even been a secession that year? Would it have come later? Would the United States of America look anything like it does today? Who knows.

But we can look at how things turned out, and we know that Lincoln was the man to preserve the Union at that time. And 152 years ago, when Lincoln was in the White House, had he but a glimpse of the legacy he would have now, it is almost a certainty that he would have been pleased.

Even if America one day becomes but a footnote on the pages of history, it doesn’t seem unlikely that Lincoln’s name will manage to slip into such a comment as part of America’s definition.